Campaign calling for 100% Renewable Energy launched in communities across Australia. 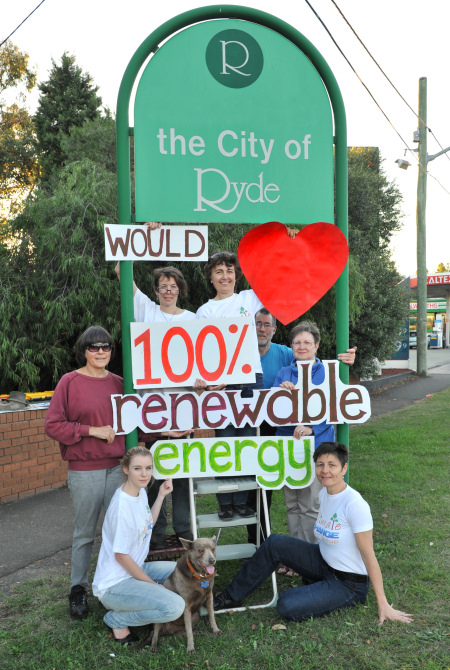 Supporters of the Ryde Gladesville Climate Change Action Group were part of a national effort in early May to call for renewable energy. It was one of over 70 events happening simultaneously in all states across Australia – with each event calling for Australia to choose a clean energy future. 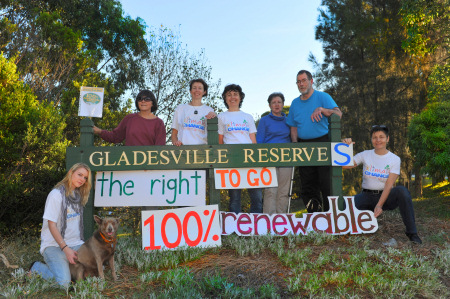 Jo Spangaro, a spokesperson for the group said, “People in this community want to be part of the change to renewable energy as they know its key to tackling climate change. Government leaders appear to be deaf to this and happy to put climate change in the too hard basket.”

We know our community is worried about this issue from the strong support we get when we talk to people locally. We also had an amazing response last year to the bulk solar panel purchase we organised. As a result of that 41 homes in this area are now generating their own power.” 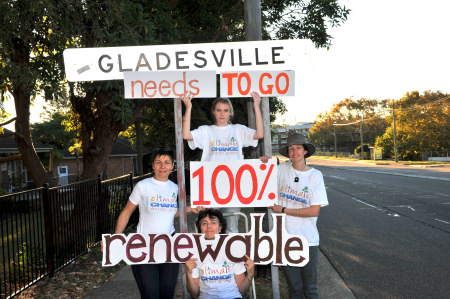 From Brisbane to Ballarat, Cairns to Canberra community groups are taking action locally. Support for renewable energy is widespread. From rural communities to the streets of the city, from grandparents to students, from farmers to doctors, renewable energy has broad support in the community because it makes sense.

“Right now Australia faces a choice,” said 100% Renewable spokesperson Lindsay Soutar from Sydney. “We can continue our dependence on fossil fuels, mining and burning coal, polluting our air and water, damaging our farmland and heath, and making an unstable climate or we can make the switch to 100% renewable energy.”

“Australia has an extraordinary natural advantage – access to sun, space and wind — we can use these natural resources to create clean, safe power that will never run out,” she said.

Renewable energy will create new industries, and lots of new jobs. Right now the rest of the world is investing in clean energy and we don’t want Australia to be left behind- we want to be a clean energy leader” said local organiser Lynda Whiteman.

Ryde Gladesville Climate Change Action Group was formed by a group of concerned local parents in 2007 and now has over 450 active local supporters. “We are not part of any party, just a group of people who are worried about the future” says Jo Spangaro. “So far the response from the Federal government has been pretty disappointing, especially from our local member, Maxine McKew who has been dismissive of the science and the communities concerns about climate change when we have met with her.”

Here’s what the Northern District Times had to say about the campaign launch (article entitled “ETS backflip leaves some out in the cold”).

Page 2 of the campaign launch article can be read here.