Was the message we made in 2m high letters on the grass at the Moocooboola Festival at Hunter’s Hill High School on 4 August.

The sign was made out of old incandescent light globes that had been removed from houses and replaced with the new low emissions (and long lasting) compact fluorescent globes. Taking this step saves approximately 83 kg of greenhouse emissions a year. 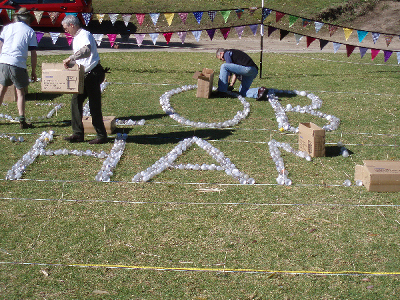 A team of us made the message using globes brought by our supporters, with extras provided by Easy Being Green , one of the companies visiting houses to switch globes over. It was a play on words signifying our encouragement of people to switch to low emissions compact fluorescents as well as our desire to see real change on climate.Using a total of 3,980 globes and measuring 80 square metres the sign informed and entertained festival goers.

The event was also covered by several radio stations including ABC and MIX FM and the Northern District Times. The sign was dismantled at the end of the day and the globes are now being recycled for their metal and glass. 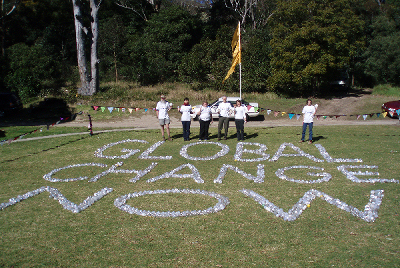 As well as making the sign Ryde-Gladesville Climate Change had a stall at the festival where people could find out more about climate change – and what we are doing to bring it to the attention of our leaders.