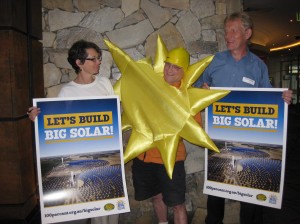 The sun was there to make the point that Australia needs a big solar project to kick start our shift to renewable energy. Ryde Gladesville CCAG is working with other climate groups around Australia on the 100% Renewable campaign to this end.

No, it wasn’t the parting of the clouds. A giant sun on legs turned up this week at the carbon tax forum run by Bennelong MP, John Alexander to highlight the potential for solar energy in Australia and to call on Mr Alexander to get behind the shift to a clean energy economy.

The sun was accompanied by members of local community group, Ryde-Gladesville Climate Action group, who attended the forum. The group, part of the new national ‘big solar’ campaign, is calling on Mr Alexander to support a new $10 billion fund for renewable energy.

“Tony Abbott’s Liberal party, supported by Mr Alexander, has so far said they will pull down this important new fund. Their position is creating industry uncertainty and preventing Australia from taking up the benefits of investment in renewable energy. Sophie Mirabella – shadow spokesperson on Industry who spoke at the forum was prosecuting the fear campaign against the carbon price package. What she didn’t do was tell people about the huge benefits this package will bring for investment in renewable energy. Neither did she provide an alternative plan to switch Australia to a renewable energy future. We were surprised to hear her saying we need to keep burning brown coal because its cheap, as this is known to be one of the most polluting substances in the world.

“If Mr Alexander really cares about rising energy prices, he’d be doing everything he can to get more solar power up. While coal and gas just keep getting more and more expensive, the price of solar is rapidly dropping. Investing heavily in renewable energy is the only way we are going to manage energy prices into the future”

“We surveyed 281 members of the Bennelong electorate last year, at shopping centres and door knocking. We found that 89% wanted to see strong policies for renewable energy. We have previously met Mr Alexander and think he understands the importance of renewable energy. We’d like to see him support the new $10 billion fund when the legislation goes before parliament.”