and that the Coalition government will pay for deciding to scrap carbon pricing. They join a number of climate scientists making the same link. We wonder how making this link is “politicizing” the bush fires as Greg Hunt claims… 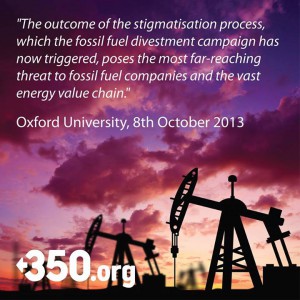 The divestment campaign launched by 350.org is according to Oxford University research, growing faster than any other divestment movement with support from Obama, the International Energy Agency, HSBC and Citi and becoming the game-changer needed to compel political action on climate change.

Help get BHP out of fossil fuels

The AGM of BHP Billiton is 21st November. Ian Dunlop was an executive at Shell and then chair of the Australian Coal Association until he saw the enormous threats of climate change. He wants to use his expertise to force BHP to get out of fossil fuels. His platform for nomination on his website.

Your super fund will have a vote. Use this form to send a message to your super fund, telling them to back Ian’s BHP Billiton board nomination.

No to the T4 Coal Loader in Newcastle

A proposed massive fourth coal terminal in Newcastle, would ship out 120 million tonnes of coal per annum or a tripling of the size of the coal port. We need to leave fossil fuels in the ground and Hunter Community Environment Centre is asking for submissions to object by 22nd November.

Submissions can be a single sentence and lodged HERE. For more background http://www.hcec.org.au/background-information-t4#overlay-context=users/annikaI/

Get Up are organizing a national day of action on climate. To show that Australians want to keep acting to halt climate change – not go backwards as the current government is doing.

Join the Ryde Gladesville Climate Action Group at 11 am at Prince Alfred Park (near Central Railway station). Bring your friends and family and look for the Ryde Gladesville banner. The 501 bus along Victoria Rd is an easy trip to Central. http://www.131500.com.au/plan-your-trip

With eight of the ten largest fund managers in Australia now responsible investors, it’s time to focus on the impact of our investments. With that in mind, this year’s conference theme is Making Responsible Investment Count. Featuring a one-day program packed with sessions driven by expert speakers and panels it will create conversation, challenge complacency, inspire action and bring responsible investment awareness to the fore by covering a range of hard-hitting topics.